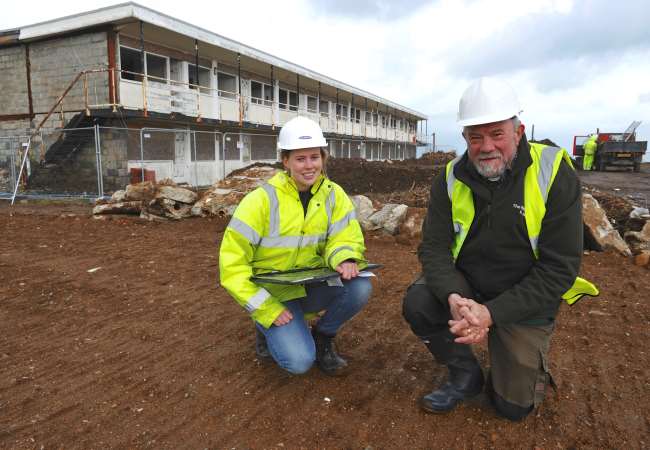 For some people retirement is marked with a gift of a clock or gold watch, but for former Geomarine transport manager,  Bob Tompkins, the send off came with a slightly more unusual gift - complex soil testing.

Bob left Geomarine last year and Geomarine promised to carry out thousands of pounds worth of work at Plemont free of charge in recognition of the 65 year-old's ties with the National Trust for Jersey.  One of Geomarine's newest recruits, geotechnical engineer Steph Foster (22) has now completed the soil contamination testing at the former Pontins Holiday Camp site and is awaiting results.

Mr Tompkins who worked for Geomarine for six years and currently serves as chairman of the National Trust's Lands Committee said ' When I was coming up for retirement with Geomarine, managing director Phil Horsley came to see me and said 'We are looking at doing something for your retirement - how about we do something on your behalf for the National Trust'  It was agreed that Geomarine would carry out free of charge the soil testing element of the demolition process at Plemont which would cost a few thousand pounds under normal circumstances.

Miss Foster explained that the work had involved creating nine test pits at three different locations on the site. She joined Geomarine last summer after graduating from Cardiff University with a degree in geology. 'I really wanted to come back to jersey because I missed it after three years of being away, so I was really pleased to get a job here' said Steph Foster, 'Geomarine are very varied in the work they do so it is very interesting'.

Charles Alluto, chief executive of the National Trust for Jersey said: We are delighted that Geomarine have kindly offered to sponsor the work to mark Bob's retirement. The demolition and restoration of Plemont is an expensive project and the support of companies like Geomarine really help us towards realising our long term vision.'