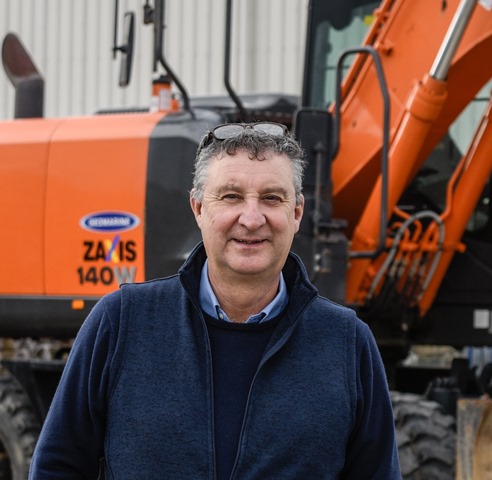 Geomarine founder made fellow of the Institution of Civil Engineers

Geomarine co-founder Ian Gilmour has been made a Fellow of the Institution of Civil Engineers in recognition of his contribution to the profession.

A fellowship is the highest grade of membership awarded by the ICE and is given in recognition of professional excellence and an endorsement of leadership, knowledge, skills and experience.

Mr Gilmour, who is now CEO of what has become the largest civil engineering contractor in the Channel Islands, is one of only three ICE Fellows in the island.

‘The ICE only awards a few Fellowships each year and so it’s a huge honour to have nearly 40 years within the industry recognised by such a prestigious organisation,’ said Mr Gilmour.

‘The industry has changed considerably and it has been a real privilege to have been involved in some challenging and ambitious projects, have the opportunity to establish and grow a successful company and work alongside and lead a dedicated and professional team.

After graduating with a degree in civil engineering in 1978, Mr Gilmour joined a UK contracting company before moving to Guernsey 32 years ago to work QE2 marina, Fish Quay and the two roll-on roll-off facilities in St Peter Port Harbour.

In 1998, with the backing of the Garenne Group, Mr Gilmour and his colleague Wedd Osmond established Geomarine.

‘We had a professional, innovative, can do attitude and that was a recipe for success and within a few years, we had expanded into Jersey. Last year, Geomarine set up an office near Southampton, which has already proved a success with projects underway in the Isle of Wight and on the River Hamble,’ said Mr Gilmour.

The company now has more than 100 employees and last year won the Institution of Civil Engineers (ICE) South West award for the best project under £1m. for its work on the Hanois Lighthouse.

‘Ian thoroughly deserves this award as his drive, energy and professionalism are the same today as they were 30 years ago. Without him, Geomarine wouldn’t be the success story it is today and everyone at Garenne congratulates him,’ said Andy Hall, executive chairman for the Garenne Group.

Outside of work, Mr Gilmour is the treasurer of the Channel Islands Group of Professional Engineers which promotes engineering in the islands and encourages and assists young people into engineering as a career and also sits on the ICE review board interviewing and assessing applications to become members of the ICE.