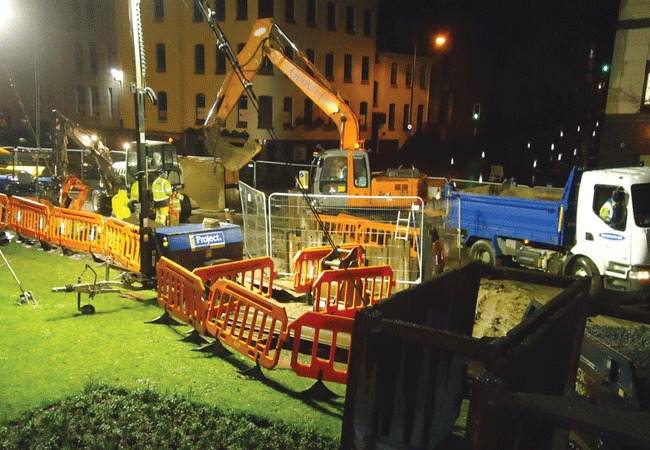 Guernsey Water, a key client to Geomarine planned major improvements to help prevent flooding that had significantly affected businesses and properties around Le Truchot and the Lower Pollet in St Peter Port.

Having successfully completed an intensive planning phase in partnership with the client, Geomarine undertook major trenching works and installed 120m of surface water pipe work under the roundabout at the eastern end of St Julian's Avenue, the taxi rank and the Lower Pollet.

In order to minimise the disruption to the roundabout and town area, it was agreed with the client to extend the Phase 1 working hours to 18 hours per day, with two nine hour shifts running from 6am until midnight. Geomarine also implemented a 7 day working week with extended hours throughout the rest of the work phases; this allowed a significant reduction to the original construction programme from 12 weeks down to 8 weeks.

The town roundabout was kept operational at all times but with restricted access. This involved limited access/egress with a single traffic lane for 2 weeks while works on the roundabout and carriage way was undertaken. Once this phase of work was complete, the traffic restrictions were lifted and work continued across the taxi rank and Lower Pollet area for a further five weeks with the finishing line passed 7 days ahead of the revised schedule.

Project Director Gary Stevenson said, 'Congratulations must go to Stuart Polson, Mick Grogan & the team who worked continuously through some of the worst weather and flooding Guernsey has ever seen. To compound matters some sections were dug completely by hand due to the congested services.'

Client Guernsey Water must also be complimented on their input of planning & Public Relations, their notification to the public, constant information updates through the site notice board and liaisonwith the media which all helped the project enormously and made for very smooth work phase transitions.

In short, a fantastic team effort.